Dialog and the Lead Vocal

I recently got a new gig mixing a half-hour TV show on a major cable network. I’ve done three shows so far and the client really likes the way things are sounding. They also seem to be really great people to work for. The production quality of the show is superb which is always inspiration for a great mix. There is a lot of music in the show and they wanted it mixed pretty aggressively. Man, they found the right guy for that! The show is also pretty dense at times with dialog, SFX and music all competing to be heard. But no problem, I’m good at clearing a space or notching out an area for the dialog in productions like this. I constantly use techniques I’ve learned mixing music.

I’ve spent over 30 years making records in the studio. I’ve worked with countless bands and singers. Probably one of the most important things in the music mix is the placement, clarity and overall feel of the lead vocal. It has to sit just right — it has to feel just right. I tend to use quite a bit of dynamic and EQ processing along with extensive automation moves to achieve this. Of course all of this depends on the type of music. If it’s a really driving and dense track, it takes more work to get the vocal in the pocket.

When working on a TV show mix such as this I treat the dialog just like the lead vocal in a music mix. Quite a bit of processing and quite a bit of automation rides in ProTools. I also really work the music tracks the same way — with compression, EQ and A LOT of automation rides. Here’s a timeline of the music tracks for a recent show I did, and you can see the amount of automation moves there are. I’m also automating the EQ for each track. Rarely does anything remain static. To give the show dynamics, emotional impact and clarity you must spend time riding that fader! 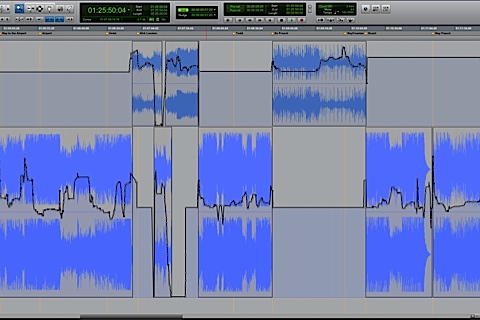 When I first started doing more post-production work I felt somewhat intimidated because I had been a ‘music guy’ for so many years. I felt there were audio techniques and skills that were used in working on TV and film that I didn’t know. But I quickly learned otherwise. What I discovered first off was that most post-production editors, sound designers and mixers came from the music industry! I also quickly understood that the expertise I had acquired recording and mixing bands for all those years could be used in post-production mixing. In fact, it was an advantage to have that experience. I’ve since had clients say to me that they preferred someone with my music industry background mixing their TV show.

So for me, and the way I work, there really is no difference between the dialog and the lead vocal.